The following may be already known by you and if so you will, I beg, pardon my bothering you.

In the Pope's Peace Note nothing is said about the future of Turkey or its peoples. This circumstance, of itself, may not be of the greatest importance, but I have learned from conversations with Von Kuhlmann and other German officials, that Germany will be satisfied with Turkey, as her return for the war, Turkey to remain nominally, perhaps as an Independent Power, but in reality a German province. Germany may partially recoup her losses in Turkey and its possibilities.

It is significant, that besides the hundreds of thousands of Armenian Protestant Christians in Turkey, there are also many thousand Roman Catholic Armenians with their separate Patriarch in Constantinople who have been substantially undisturbed during the war.

Again, the Pope has been permitted, since Italy declared war against Turkey, to maintain a Papal Legate at Constantinople, Cardinal Dolchi, with semi-diplomatic powers and who is well informed as to Turkish-German plans.

May I venture to hope that this information may be of some slight service, and with kindest regards, beg to remain,

Very sincerely yours,
Abram I Elkus 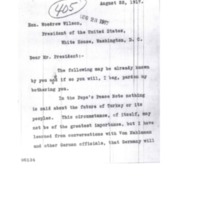