Dear Mr. Secretary
Your letter of September 10th was handed me by General Treat. First of all, I wish to thank you most sincerely for your cordial expressions of approval for what has been done. It has not been easy at all times to determine the best course to pursue. The British and the French, as you know, are each watching out that the other does not receive too much attention from us. So far we have succeeded in steering fairly clear of breakers, as I have persistently tried to impress both allies that our whole purpose here is to assist in every possible way in beating our common enemy, without any thought of leaning toward one ally more than the other.


With reference to our entering the trenches for active service, I have emphasized the necessity of thorough preparation, and have been following a logical program leading up to the important final training of artillery and infantry in cooperation. This has been accepted as sound by the military authorities, both French and English, so that unless something very threatening should occur, we should not go in until we are ready. Of course, even then, there will be much to learn from actual experience.

In all my conferences with General Petain on this subject we have fully agreed that, when our troops go into their sector, they would be fully supported by the French artillery and be in close touch with their infantry. It is also out joint idea that every effort should be made to have the first clash, if possible, a victory for the Americans. Such a result would of course raise the morale of our allies and correspondingly depress the enemy. General Petain is in full accord with this view, and I am sure that when the time comes he will cooperate to the fullest extent to bring about such a result.

The venereal and liquor problems are both extremely difficult. The greatest danger points seem to be our ports of entry. I have recommended to the Minister of War, that he declare a "state of siege," at both Bordeaux and Saint Nazaire, and he has promised to do it. Such a state practically exists in Saint Nazaire already. This corresponds to our martial law and the control of these questions would then be in the hands of the local French military commanders, who, in cooperation with out local commanders, under stringent orders, should be able to keep the ports comparatively clean. There is another serious question there, too, and that is the large number of spies that continuously infest these ports. Martial law should give us a much better control of that danger.

In the training areas men are kept busy and as this region is entirely under army control, the above problems are less difficult, although not easy there. I have established a series of medical aid stations in these areas for the sole benefit of the French people, in cooperation with the leading local French women. This effort is very much appreciated by the inhabitants who, for the most part, have been left almost without medical attention. It is also hoped that venereal cases among the women may eventually visit these dispensaries for treatment. The organization of these stations has been placed under Major Young, who is one of Johns-Hopkins' most famous doctors, and who has made a specialty of this class of disease.

By publishing in orders the ravages of venereal in Europe, and the constant dangers of uncontrolled secual relations, and by encouraging YMCA work, and demanding the interest of officers in the welfare of their men, an excellent foundation has been laid. I feel much pleased with the attitude of the army toward this question and am gratified at what is being accomplished toward morality. I shall be very glad to have Dr. Fosdick make a visit here to study the situation and give us the benefit of his experience and advice. We cannot do too much to protect our young men from immorality and consequent disease, to say nothing of its effect upon our fighting strength.

With relation to the general officers, I wrote you in my letter of October 4th my views in general, and my opinion of several of these officers in particular. I think you have made a good selection in General Morrison in charge of training. He has been quite ill while here, but is now visiting the French and British fronts as was done by the other general officers. His illness has delayed him so that he will return a little later than the others. He is not strong enough to stand the hard field service required, as he has aged a lot since he commanded a regiment of my brigade on the border over two years ago. I would emphasize my remarks with reference to the others mentioned in my former letter, and am adding some further comment in the enclosure herewith.

Generally speaking, the young and active officers of a command look upon their division commander as their leader, and if he is inactive they lack the confidence in him necessary to his success. Such a man becomes more or less of a figurehead instead of a soldier in whom they believe. The position of a division commander is so important that it may be very truly said that the success of this war depends upon them. If a division commander does not know his work and is not up to the high standard found in the allied armies, he has no place in our army here.

The matter of recommending a Chief of Staff, and I may say of selecting men in general for important assignments, is the most difficult thing that has so far confronted me, and I can readily understand how puzzling it must be for you. Most of our officers are, of course, untried, and one's opinion of men when they were young is very apt to be wrong after those same men have grown older. I am very favorably inclined toward General Biddle, and I think perhaps you will find him a broad-minded, energetic man who may measure up to your ideal. In my conversations with him it seemed that his grasp of the situation here was quite large and clear. Of course one objection is that he has not had very much to do with troops. However, I believe he has natural soldierly instincts and that he has taken every advantage that an engineer officer could take of the opportunities that have come to him.

Next to him, I have an idea that General March would make a good executive. I have always had a high opinion of March and have often thought of him as timber for Chief of Staff, even before I received your letter. I think March is a strong man and that he would be of great assistance to you, especially in the possible reorganization of the War Department, which I think you are going to find necessary. I should miss him here but consider your need greater. I shall have General March come to my headquarters at an early date in order that he may make a study of the general staff organization that I have established here. All of the visiting general officers have been impressed with the plan and especially with the very complete coordination of all staff and supply departments under one control. It might be advisable to have a study made of it for application in the War Department.

There may be other officers who would do better, but it would be a chance, so therefore I recommend to you the consideration of General Biddle as your Chief of Staff and General March as his assistant. You will then have two good men, and if General Biddle should not turn out to be the man I think he is, you would have General March there to take his place or to retain as assistant in case you should not be satisfied as to his qualifications for chief, and conclude to select someone else.Just a word as to the supply departments. The general officers sent over complain that their divisions are not being provided with equipment, especially transportation, and say they are told that their transportation and other things that are lacking will be furnished upon arrival in France. Of course, there is no transportation here and little else that does not come from home, so that our organizations are now arriving without adequate transportation and generally none.

It seems to me quite necessary that each division should be assembled at some point near the port of embarkation, where it can be fully equipped and the division commander be given an opportunity to see that he has everything in readiness. This would insure his being prepared to take care of himself upon arrival here, and would avoid confusion in issuing initial equipment at this end and possibly the more serious inconvenience of not having it at all. I send you this as I get it, as it may not have reached you in just this light.

The War Department now has our complete project for troops and supplies, estimated on a basis of 1,200,000 men. It also has the priority schedule for both personnel and materiel. So there should be less difficulty in handling both when the personnel is organized, and if the supplies are available. In making these comments I do not fail, Mr. Secretary, to appreciate the enormity of your problems, but make them with a view to aiding you in their solution.General Bliss and the other members of the allied conference are in London. I hope to have an opportunity to go over in detail many things with General Bliss before he returns. I am writing you in a separate letter a discussion of the general military situation.

In conclusion, Mr. Secretary, permit me to congratulate you and the country in that we have you as Secretary. You are doing a great work and doing it well. May I ask you, at your convenience, to extend to the President my most loyal greetings. 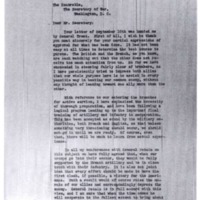