Documents stored in a commemorative scrapbook, including letters, postcards, photographs, and other miscellaneous paper items.

The Laura F. Buerger Collection documents the life of the American soldier overseas as well as life on the home front during, and immediately, following World War One. The correspondence is from several different people, some of whom are mentioned in the newspaper clippings included in the collection. The newspaper clippings and regimental newsletters track the wartime activities of the 302nd Engineers stationed out of Buffalo, New York, where Laura Buerger lived. The photographs are from Buerger’s uncle and American soldier Franklin Gahue. Buerger’s uncle’s photographs document an exhibition in New York City after the Paris Peace Conference in 1919. Franklin Gahue’s snapshots document the soldier’s life in camp in both serious and light-hearted moments. 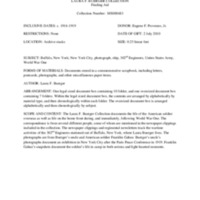