Paragraph 1. The third session of the Supreme War Council began Wednesday January 30th and continued until final adjournment at noon February 2nd. It considered 14 joint notes of the military representatives and two separate resolutions the full text of which will be forwarded by another conference hand. The action on those of essential importance is indicated below.

Paragraph 3. All that follows to be held in absolute confidence: Joint note number 1 and number 12 were on the subject of general military policy for 1918 and general plan of campaign for 1918 respectively. The general military policy approved by the Supreme War Council for 1918 involves a general defensive attitude combined with readiness to take advantage of any opportunity for the offensive. The general plan of campaign for 1918 is to be one of general defense on the western, the Italian, and the Macedonian fronts. The English insisted upon an offensive campaign in Asia Minor with a view to detaching Turkey from alliance with the Central powers. This was supported by the Italians. The French strongly objected. Mr. Lloyd George and Lord Milner said that this offensive campaign would be conducted by British forces now in the Eastern theater and would not divert troops from the Western front. The British military advisers supported this position. The British Commander in Chief and Chief of Staff opposed it. The final action of the Supreme War Council was as follows "The Supreme War Council accept note 12 of the military representative(s) on the plans of campaign for 1918, the British Government having made it clear that, in utilizing in the most effective fashion the forces already at its disposal in the Eastern theater, it has no intention of diverting forces from the Western fronts or-------relaxing its efforts to maintain the safety of that front which it regards as of vital interest to the whole alliance" In note 12 the arrival in France of at least two American divisions each month is stated as an essential condition on which the plan of campaign is based and is Sine-Qua-Non to safety of the western front. This imposes on us the obligations to provide this monthly minimum and necessary tonnage must be obtained from our own resources.

Paragraph 4. Joint note on note number 14 was on the subject of an inter-allied general reserve for the campaign of 1918 for use according to circumstances on the British French Italian or Macedonian fronts.

Paragraph 5. By the adoption of the first paragraph of note 14 the Supreme War Council decided to establish a general inter-allied reserve. A special executive committee consisting of General Foch, Chairman, and Generals Wilson, Cadorna and General Bliss military representatives with the Supreme War Council of Great Britain, Italy and the United States was created and was charged with the duty of determining the composition and strength of the general reserve and the contributions of each nation thereto; the selection(s) of locality(ies) in which the general reserve is normally to be stationed; the decision(s) and issuance of orders as to time place and period of employment; the determining of the time place and strength of counter offensive and the transfer to the proper Commanders in Chief of troops necessary for the operations. 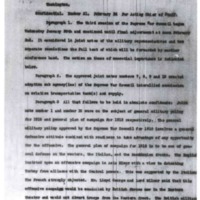