Confidential for Acting Chief of Staff.

Paragraph 1. As stated in my number 16 the British have agreed to bring over in their own tonnage the personnel of six complete American divisions the last troops arriving not later than June. We have now in France five organized divisions. Yesterday the Supreme War Council adopted a resolution addressed to the four governments stating as an absolutely necessary condition for the safety of the Western front during the year 1918 that American troops must arrive at the rate of not less than two complete divisions per month. This rate of movement must begin at once. If it can be done we will have here 21 divisions by about July. It is of vital importance that this be done. Can you do it? It requires only a moderate increase in troop transports. You can expect further assistance in tonnage from the British. Clothing and quartermasters should be provided in time for each division regardless of cost.

Paragraph 2. Can you not hasten action on my number 16 paragraph 1 and General Pershing's number 555 about the six divisions to be transported by the British. 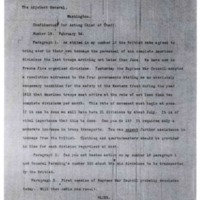