COPIES FURNISHED AS NOTED:
Number 555, January 30th.
Confidential.
For the Chief of Staff.
Paragraph 1. Reference my cablegrams 487 and 493 and your cable to General Bliss, your conclusion that the proposition to send Infantry battalions for service with British Divisions was recommended by me was erroneous. Have had matter under consideration for some time and am convinced that the plan would be grave mistake. Stated my views fully to Sir William Robertson which resulted in delay until arrival of British Prime Minister yesterday. Following memorandum of our position was presented in conference between ourselves and British and was agreed upon. Memorandum has approval of General Bliss.

Subparagraph A. "This memorandum refers to the request made by General Sir Robertson, representing the British War Office, that the American Government send by British shipping to France 150 battalions of Infantry for service in British divisions on the Western front. Replying to this proposal, the following objections appear: First, the national sentiments of the United States against service under a foreign flag. Second, the probability that such action by the United States would excite serious political opposition to the administration in the conduct of the war. Third, the certainty of its being used by German propagandists to stir up public opinion against the war. Fourth, it would dissipate the direction and efforts of the American Army. Fifth, difference in national characteristics and military training of troops and consequent failure of complete cooperation would ultimately lead to friction and eventually misunderstanding between the two countries. September 6th, additional man-power on the Western Front could be provided as quickly by some plan not involving amalgamation.

Subparagraph B "In order to meet the situation as presented by Sir William Robertson and hasten the arrival and training of American troops, it is therefore proposed that the British Government use the available sea transportation in question for bringing over the personnel of entire American divisions under the following conditions; First, that the Infantry and auxiliary troops of these divisions be trained with British divisions by battalions, or under such plans agreed upon. Second, that the artillery be trained under American direction in the use of French materiel as at present. Third, that the higher commanders and staff officers be assigned for training and experience with corresponding units of the British Army. Fourth, that when sufficiently trained these battalions be reformed into regiments and that when the artillery is fully trained all the units comprising each division be united under their own officers for service. Fifth, that the above plans be carried out without interference with the plans now in operation for bringing over American forces. Sixth, that question of supply be arranged by agreement between the British and American Commanders in Chief. Seventh, that question of arms and equipments be settled in similar manner."Subparagraph C. It is recommended that the provisions of the memoranda quoted in subparagraphs A and B be approved.

Paragraph 2. If carried out this arrangement will provide 6 additional divisions to be brought over by British shipping. Details as to available shipping and recommendations as to troops to be selected and their equipment and supply will be submitted at an early date.
(Signed)
Pershing. 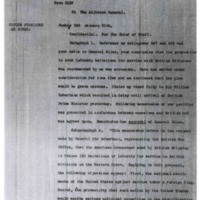