Number 15 January 27th.
Your confidential number 14 states that General Pershing has approved the project of 150 of our infantry battalions to serve temporarily with the British but directed me to confer with him before making final arrangements to carry project into effect. General Pershing states that he has never approved this project and in conference with British Chief of Staff, General Robertson, and myself, he insisted that British should bring over six of our complete divisions instead of the 150 battalions. This would give British 72 battalions instead of the 150 which they want. General Robertson telegraphed General Pershing's proposition to Mr. Lloyd George and he has replied to-night asking for an interview with General Pershing and myself at Versailles January 29th. The supreme War Council meets on Wednesday, January 30th. If disagreement is not adjusted in conference with Mr. Lloyd George, I feel sure the question will be taken up following day by Supreme War Council.
Bliss.
Copy for Secretary of War. 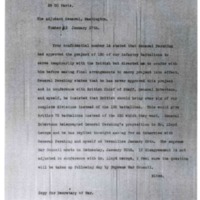