No. B1 CO
From H A E FT
o The Adjutant-General, Washington.

In England President Wilson's message is well received by all sections of the press. Liberal papers are especially enthusiastic and prefer the President's treatment of the Russian situation to that of Mr. Lloyd George. More conservative papers point out that some of the President's ideals cannot be realized until the league of nations has been established. The principal labor organizations consider the President's view identical with their own.

It is announced that the shortage of beef is temporary and inconvenient rather than serious. Cattle are to be requisitioned. From designated groups of breeders and government control over supplies of sheep and mutton has been established.

Italian press approves in general both Lloyd George's and President Wilson's speeches but is dissatisfied with the failure of either to mention Italian claims in Adriatic and fears that a frontier rigidly drawn on lines of nationality will again leave Italy at the mercy of an Austrian stragetic frontier. Press praises stress on the principal of nationalities in the President's speech but regrets that Austrian Empire seems exempted from its application while it is applied rigidly to Italy. It further expressed dissatisfaction with Sonino for not having made Italian aspirations appreciated more fully by allied public opinion.

Italian press asks Entente powers to stand by the agreement(s) already made with and in this is supported very generally by French press which has grown very hostile to Austria.

In France a socialistic attack on the government in attack on chamber for failure (1) To send socialist mission to Petrograd (2) To recognize Maximalists and take part in Brest peace negotiations (3) To have a common statement of war aims drawn by allies. Government rejected first two in which it was supported by nearly all the chamber except Socialists and by all sections of the press except Pacifists. On the third demand Pinchon explained that this had been proposed but failed and added that France still considered herself bound by treaty made with Allies. French press considers that proposition for a common declaration by the Allies failed (1) Because the French refusal to accept Maximalist government (2) Because of treaty with Italy in regard to Adriatic. On both points press supports government.

In Russia Maximalist press published full text of President's speech calling his conditions a great victory in the struggle for democratic peace. Anti-Bolshevick papers published Lloyd George's speech under heading "He abandons Russia to her fate." Ukranian Republic has entered peace negotiations on footing of an independent power.

In Germany complete speech President Wilson not printed in press but 14 conditions of peace are given entirely. Conservative and most liberal papers reject terms as impossible. Frankfurter Zeitung, Vorwaerts and minority socialist papers suggest that although 14 points are inacceptable they might at least form basis for conversation. Krupps have invested two and one half million dollars in Hamburg American and North German Lloyd lines to secure controlling interest and undertake merchant ship building on large scale. It is announced that 8th German war loan will be floated in March.
Pershing.

Copy for the Secretary of War 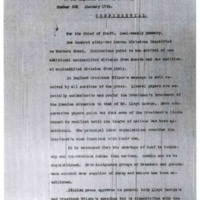