Although the situation in Italy may have changed very materially before this letter reaches you, I feel that a statement to you, direct and confidential, of what we see and feel here may give interest and may be of value, in the final assessment by you of what Italy represents now and will represent at the time when peace shall be made.

The Italian fighting force is good enough, at least, for the present and according to all reports, Italian, French, and English, is strong enough to hold at least until spring its present line from the Piave mouth across to the Asiago, which has recently been consolidated by the brillian French capture of Monte Tomba. When spring comes, if Italy can hold out until then, the ability of the Italian army to continue to hold that line against the great offensive will, according to views of French and British authorities and our own observers, depend on, first, whether she has learned enough from the French and reorganizes her entire system of tench warfare which is, with modifications, the Prussian system before the lessons of this war were learned, and adopt the new system founded on the lessons of the present war; secondly, on whether her officers in command will prove equal to the task which will fall on them. As I understand it, the weakness under the Italian present system is that they make their front line their principal line instead of having, as France, England, Germany and Austria have, their principal line the second, from which they can, if any part of the front line is taken, render it untenable for the enemy by shell fire and immediately recapture it. They are also said to be very weak in their aeroplane work in conjunction with their artillery. They are extremely dashing and good at bombardment from aeroplanes; but are weak in "spotting", photographing, and team-work.

One other military weakness exists here; but unfortunately it is not confined to Italy: that is the absence of one supreme commander. I personally believe and have believed for over a year that the efficiency of the Allied arms would be more than doubled if there were one generalissimo and one general staff. My reading of history from the time of Greece down, I might say from the time of Joshua down, has led me to distrust profoundly joint military authority. Our own war was the absolute proof of the weakness of divided authority. The North never won until Grant was made Commander-in-Chief of the Union Armies and given a free hand, and General Lee was always hampered, even in the command of his own Armies, by a civil Government in Richmond.

There is however a greater weakness to-day in Italy than any military one. This is the want of coal and provisions and articles of prime necessity. There are towns in Italy to-day in which there is no wheat at all. Last week Palermo was for several days without grain, the ship on which they had been counting having been injured on her voyage and obliged to put in for her repairs at Malta. Messina and Naples have been without more than twenty-four hours' supply and many smaller towns have been like Palermo, without anything. There is a certain quantity of grain in Italy, enough perhaps if it were distributed to run Italy for the next month and a half or two months. But the lack of coal prevents its efficient and necessary distribution. The newspapers a day or two since contained official statements of the number of cars of coal which were already on the way to various points in the southern part of Italy. They range as low as four wagon loads (the small Italian railway freight car) for some important towns in the south.

A gentleman who saw the King this morning says that the King said that coal to-day is the most immediate and pressing necessity of Italy more so even than bread,for without coal the railroads cannot run and the armies cannot be supplied with either provisions or ammunition.

The absence of this necessity is, I know, at this moment the chief cause for anxiety of those responsible for Italy in this present crisis. While the Government has been greatly strengthened for the moment by the new coalition of Sonnino, Orlando, and Nitti, the failure to supply with bread for any appreciable time any one of the big cities might not only upset the Government Baron Sonnino told me a few days since that it kept him awake at night to think what might happen.

Meantime, there is a great propaganda going on still in Italy more secretly and insidiously than ever; and I hear of its reaching even the soldiers. It is said that Giolitti, who lost out at the last meeting of the Parliament, is with his lieutenants working to the utmost to accomplish the overthrow of this Government. The Clericals, that is, the majority of them, for some of them are very patriotic, are said to be working hand in hand with Giolitti. Your message just delivered has been taken here with a seriousness not surpassed by any of your utterances; and I can say nothing more expressive. The people are, from all I learn, tremendously impressed and encouraged by it. The lay press, which I believe reflects the opinion of the public men, does not know just how to interpret it; that is, the reference to Italy's having her confines established along clearly recognizable lines of nationality. Italy's part is the only one they appear to have thought of and the press is full of arguments about Italy's aspirations for Istria and the Dalmatian coast, the control of which, indeed, gives absolute control of the Adriatic, so long as it is necessary to have defensive frontiers. All of this, however, I have telegraphed to you.

Articles by that half-wild, half-expatriated American, Whitney Warren, inveighing against America's ignorance and neglect of Italy have been published in all the papers and I hear that he, in a visit to Italy not long since, stated that he and those with him had forced America to declare war on Austria-Hungary and would now force her to send 500,000 troops to Italy. Due to the ignorance here of America and Americans, he is taken very seriously and this makes his wild statements somewhat mischievous.

Italy, however, at heart, is sound for Democracy. The great body of her people are thoroughly and intensely patriotic. It is only a fraction of certain classes and parties that are engaged in the "defeatist" work. And if the people can be fed, everything will go all right. Meantime, I feel it to be of the utmost importance that everything should be done which can be done to show our appreciation of Italy and our sympathy with her. She has undergone and is undergoing far more privation than any other of the western Allies and she has carried and is carrying still burdens which no other of the Allies has had to carry. She has felt that she is not fully understood. She has felt the apprehension that her entrance into the war against former allies might lower her in the estimation even of her friends and she has felt deeply the blow given her by the break on the part of a portion of her army on the Isonzo. What she has felt is, I think, a tribute to her sense of honor. No one who knows her history could fail to know that in this war she was obliged to throw her whole power on the side of Liberty, and nothing of the rest was her fault; but only her misfortune, a part of the burden she has had to bear. She is well worth helpingapart from everything else. Her people are at the core whole for liberty and she has rendered and is rendering an immense service to our cause. Whatever the public men and politicians and press may have said at any time, your messages have gone straight to the heart of the people of Italy and I believe that you can count on them in the future to be the staunch supporters of the broad and fundamental policies for the good of humanity which you have so clearly presented.

I would like if possible to see some American troops sent here to Italy, as many as can be sent. It will have an effect which will last for generations and it will have a greater effect than anything else which we could do. The flag will make them feel that we are close to them. I have told you in a former letter or telegram of a blind "mutilato" (who had lost both eyes and almost all of both hands) coming up to me after the great demonstration which Rome made to celebrate our declaration of war against Austria-Hungary and asking to be permitted to touch the hand of an American officer, Captain La Guardia, who was here that evening. He said: "I feel that when I am touching his hand I am grasping the hand of the American Army".

I know very well the immensity of the demands made on our military resources and I know the colossal burdens that are placed on you. I feel, however, that I know Italy now better than anyone in Washington can know it. And I feel that in making this suggestion I am not increasing your burdens; but lightening them. The Piave line is based on the resolution of the people of Italy to see the war through to a finish. If the foundation gives way and if that line gives way, Italy will be lost and it will imperil the cause which you have done so much to bring to a triumphant conclusion. It is not too much to say that I believe that the whole success of our cause to-day rests upon you.

I am, my dear Mr. President, always,P.S. Since writing the foregoing I have been to a great meeting at the Campidoglio, presided over by Mayor Colonna, at which Nitti and Marconi and briefly Col. Perkins and I spoke, in honor of our Red Cross " and I may say of America. It was a great success. Nitti gained great applause when he invoked the sending of the Stars and Stripes here to Italy. He said the number of the troops did not matter but Italy wanted the American flag as a token of all that America stands for. 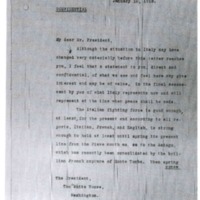