Cable Company
No. 11 CO
From Paris, To The Adjutant-General, Washington.

For the Chief of Staff.

Paragraph 1. Arrangements completed for putting first division into the line. Sector selected north of Toul. Relief of French troops now in sector will probably begin on night of nineteenth and twentieth instant.

Paragraph 2. Arrival of 4 additional divisions from Russia make total of 160 divisions on the Western front. Indications point to the arrival of 1 additional division. 70 Divisions are credited with being in Russia but the veterans are old and unreliable. Three German divisions Macedonia and 8 in Italy. Present distribution of Austrian infantry divisions is Eastern Theatre 35, Balkans 2, Italy 42 and one-half, total 79 and one-half.

Paragraph 3. In England Mr. Lloyd George's speech receives the most cordial indorsements from all sections of the press. Even the Pacifists have not criticised it in principle. The papers which have been suspicious of allied war aims and have been demanding a restatement express themselves entirely satisfied. Lord Reading's appointment obtains great favor. Press opinion is that the government has made an excellent choice.

Paragraph 4. In France President's speech to Congress has been received with unqualified approval by the French Press. The reference to Alsace and Lorraine and the doing away with secret treaties are especially commended. Oat shortage in France is great and no relief is in sight from imports as full capacity of shipping must be employed for wheat.

Paragraph 9. Violation of food control in Germany threatens to undermine whole system. Confidential reports from Neukoelln disclosed that municipal authorities there had been obliged to buy at prices in excess of legal rates to compete with other municipalities paying four and five times American market rate. Big industries also buy at excessive rates with results that crops are sold before reaching open market. Prussian food commissioner Waldon attacked for incompetency. Violation facilitated by official underestimate of crops made prior to harvest. German army rations average 600 gRAM S per day compared with 750 in peace times; meat 6 days per week; grease rations irregular.
Pershing. 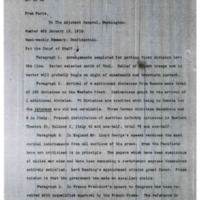