Memorandum for the Postmaster General:Postal Censorship.

Postal censorship commenced at New York on the First of November with a very few employees. At present there are 355 employees and something over 20 per cent of the mail passing between the United States and Latin America and Spain through the New York gateway is being censored. To censor all of the mail would probably require a force of between 800 and 1000 at New York and possibly half as many more at other points where branches should be established in order to make censorship complete.

The close co-operation between the two censorships necessary to produce best results is self-evident and this co-operation and interchange of duties at present existing will develop naturally along with the development of the postal censorship.

A few examples of what the postal censorship has disclosed are as follows:
1. Interception of a large quantity of insiduous pro-German propaganda designed for Latin-American countries as well as for the United States.
2. It has served to reveal the names of a number of persons who are working against the interests of the United States and in some cases has led to arrests.
3. It has assisted in discovering and defeating the attempts of suspects to enter or leave the United States.
4. It has enabled the proper officials to prevent naval information and information relative to the sailing of merchant ships from leaving the country, all of which information would have been of benefit to the enemy.
5. It has been the means of apprising our officials of the existence of various wireless apparatus.
6. It has enabled our officials to ascertain the identity of many individuals in this country and abroad who are acting as cloaks and inter-mediaries for the transmission of mail and information to enemy countries.
7. It has furnished the Navy Department with much miscellaneous information of undoubted use to it in prosecuting the war.
8. It forms an absolutely essential link in maintaining a complete blockade of the Central Powers.
9. It has disclosed upward of 1200 violations of the Trading with the Enemy Act, which violations included attempts to communicate and continue trading with enemy firms, discovery of violations through false description of goods and consignees in applying for export licenses and the use of imtermediaries to continue trading with firms on the enemy trading list.10. Valuable information showing attempts to hide enemy ownership of property instead of reporting such ownership to the Alien Property custodian have been detected and also information as to subterfuges to export food in large quantities by using a number of names to cover large shipments to a single firm.

Censorship of transit mail going through the United States between Latin America and Spain has proven particularly valuable. Many names of cloaks and covers for enemy firms have been found and efforts to transmit funds to enemy interests in Spain have been frustrated, as well as other commercial transactions of benefit to the enemy.

Activities of the powerful enemy banks have been detected and hampered, including efforts to divert trade away from Allied merchants in Latin America.

Valuable information for the State and Treasury Departments has been secured and transactions between British, French and Japanese firms with houses on the enemy trading list have been found and called to the attention of their governments.

The Army representative of the postal censorship, with reference to the value of the data obtained, states in part, as follows: "The tremendous value of the data obtained lies in their accuracy and freshness. The material, especially in the case of letters, is first hand and not as with Department of Justice reports, once or twice removed. In the opinion of officers who handle the various reports those coming from the postal censor are the most valuable received."The pay roll of the postal censorship for the month of December was about $18,000.00. The service, when developed to completion, will cost probably a million-and-a-half to two million dollars a year, which would be no more than the cost of two 8000 steel cargo steamers or less than one day's pay for the army and navy, yet a single letter caught by the censorship might save several steamers and many lives from destruction at the hands of enemy agents.

Chairman of the Board. 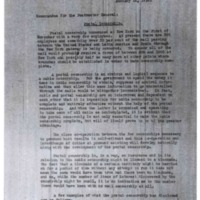