ABROGATION OF TREATY WITH NORWAY AND SWEDEN OF 1827 BYRESOLUTION OF THE SENATE.

Article XVII of the treaty with Sweden and Norway of 1827 revives Article XVII of the treaty of 1783 (both treaty of 1827 and revived articles of treaty of 1783 are regarded as in force between the United States and Sweden and Norway separately) which reads as follows:"One of the contracting parties being at war and the other remaining neuter, if it should happen that a merchant-ship of the neutral Power be taken by the enemy of the other party, and be afterwards retaken by a ship of war or privateer of the Power at war, also ships and merchandises of what nature soever they may be, when recovered from a pirate or sea rover, shall be brought into a port of one of the two Powers, and shall be committed to the custody of the officers of the said port, that they may be restored entire to the true proprietor as soon as he shall have produced full proof of the property. Merchants, masters, and owners of ships, seamen, people of all sorts, ships and vessels, and in general all merchandizes and effects of one of the allies or their subjects, shall not be subject to any embargo, nor detained in any of the countries, territories, islands, cities, towns, ports, rivers, or domains whatever, of the other ally, on account of any military expedition, or any public or private purpose whatever, by seizure, by force, or by any such manner; much less shall it be lawful for the subjects of one of the parties to seize or take anything by force from the subjects of the other party, without the consent of the owner. This, however, is not to be understood to comprehend seizures, detentions, and arrests, made by order and by the authority of justice, and according to the ordinary course for debts or faults of the subject, for which process shall be had in the way of right according to the forms of justice."The last two sentences of this article (that is, the portions between "merchants, masters, and owners.... forms of justice") are causing the difficulties in the operation of the plans of the Shipping Board and the War Trade Board.

A large number of Norwegian ships are being built in American shipyards, and the Shipping Board is desirous of taking over these ships for the purpose of speeding up their construction and for the purpose of requisitioning them when completed for the use of the United States; but the Board hesitates to do so in the face of the treaty provision quoted and of the protest of the Norwegian Government thereunder. A plan of having the title to these ships vested in an American corporation and having them chartered to the Shipping Board during the war is being worked out so as to avoid a possible violation of the treaty.

The War Trade Board is desirous of controlling the movements of Swedish and Norwegian ships coming to American ports by the refusal of licenses until the owners or masters sign the "bunker agreement" by which in general they undertake not to assist the enemy, but to transport cargoes for the Allies. In some cases the ships come here with full bunkers for the purpose of unloading part of their cargoes, without taking on any supplies or bunkers. To refuse a license to at least this class of ships, and so to detain them until they sign the bunker agreement, would seem to be a violation of the treaty, and would leave a large number of ships free from the control desired by the War Trade Board. Relying on this treaty, the Swedish Government has protested against such action on the part of the War Trade Board.

The Food Administration has seized certain supplies held in this country by Swedish and Norwegian owners, and such seizures might be regarded by Sweden and Norway as violating this treaty, although they have not yet, so far as I am advised, raised the treaty article in this connection.

The so-called Seamen's Act has abrogated articles in these treaties relating to the apprehension of deserting seamen, and has modified other articles relating to the right of consular officers to decide differences between the captains and crews of merchant vessels. Under this Act notice was served on Norway that this Government desired to suspend the articles affected but retain the remaining articles of the treaty. Norway has refused to accede to this request, and there is nothing left to do but to terminate the treaty.

In view of the foregoing, I am of the opinion that it might be well to terminate these treaties by one year's notice, in accordance with their terms, or preferably, to abrogate the treaties by a resolution of the Senate. I enclose the subjects of the articles of these two treaties, which show the scope of the matters covered by them. While it is convenient to have agreements with these countries on these subjects, yet the objects and terminology of these articles drafted 90 to 135 years ago are largely unsuited to present conditions.

TREATY OF APRIL 3, 1783.
Article 2. Favored Nation Clause.
5. Liberty of religion, burial, certificates of death.
6. Inheritances and estates.
7. Free trade with enemy, free ships - free goods save contraband.
8. This freedom shall extend to all articles save the following
9. Contraband articles.
10. Non-contraband articles.
11. Sea-letters or passports of vessel and certificates of cargo in war time.
12. Exhibition of same.
13. No search for contraband listed in certificate of cargo; prize proceedings; delivery up of contraband and release of vessel.
14. Enemy ships - enemy goods.
15. Damages by men of war, made good.
16. Privateers to give bond against damages.
17. Recaptures; embargoes and detentions of vessels, merchandise and effects.
18. War against common enemy:-24 hours in power of enemy.Prizes in each others ports.
19. Prizes brought into ports of other when neutral.
21 Vessels driven into port by tempest and enemy.
22. In war, 9 months for citizens to depart, etc.
23. No privateers or letters of marque to be issued against the other.
25. Search in time of war.

Separate Article 1 and 2. Protect and defend effects of citizens.
4. Merchants and captains free to manage their affairs, load and unload, etc.
5. No searches of vessels in port, no embargoes, etc.

SWEDEN-NORWAY TREATY 1827.
Article I. Sojourn and reside, rent and occupy, security and protection.
II.National treatment of vessels.
III. National duties and charges on imports in vessels.
IV.National duties and charges on exports.
V.St. Bartholemew.
VI.Exception of coastwise trade.
VII.No preferences to importations in own or third powers vessels.
VIII.No prohibition or restriction or duties of import or export unless same to others.
IX.Same tonnage or other duties as imposed on every other navigation.
X.Same transit, bounties and drawbacks as to others.
XI.Freedom of vessels to enter and depart without unloading or paying extra charges.
XII.Same for part cargo.
XIII.Consuls - rights, duties, seamen's disputes.
XIV.Deserters.
XV.Shipwrecked vessels.
XVI.No guarantine, if vessel carries bill of health.
XVII.Revives Articles 2, 5 to 19, 21 to 23, 25 of treaty of April 3, 1783 and also Articles 1, 2, 4, 5 of separate Articles of same date.
XVIII.Notice of blockade.
XIX.Duration.
XX.Ratification.

NOTE. The Consular Treaty of 1910 with Sweden covers Consular rights, duties, and immunities. 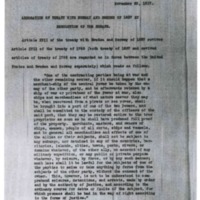