Replying to your request of November 28, for a statement as to any legislation which should be considered by Congress at this session, I enclose memoranda on this subject which are self-explanatory.

In addition to these memoranda I might suggest that, in my opinion, it would be wise if Congress would pass a resolution suspending during the term of the war the so-called Seaman's Act. I understand that Secretary Redfield is strongly in favor of this. Many protests from foreign countries, particularly the Allied countries, have come to my knowledge complaining that as a result of this Act it is impossible to hold seamen on merchant vessels as they are free to desert whenever they please, following their own inclinations whether voluntarily or induced by German intrigue.

In this connection may I also suggest that it would be of great value to this Department if a law could be passed making it perjury for false affidavits to be presented to this Department or any Department of the Government by persons seeking action in support of their interests here or abroad. I understand that there is a provision in the Civil Service law which protects the Commission from misstatements. Such a law for the Department of State would go far in preventing it from being imposed upon by unscrupulous persons. Now, as heretofore, the Department has to rely upon statements in affidavits presented to it as the basis for communications with foreign governments. It is very important, particularly at the present time, that there should be some law requiring persons to tell the truth and nothing but the truth in the sworn statements which they present to the Department in support of their claims. 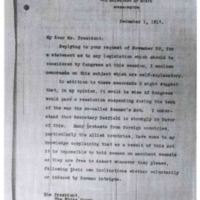