HFPCABLE COMPANY
CABLEGRAM
RECEIVED AT THE WAR DEPARTMENT
No. C 1 CO
5:10 A. M.
From HAE To The , Copies furnished as noted June 1st For the . Extra Rush.

Later report concerning bringing down hostile machine by Lieutenant Douglas Campbell, May 31st, reported yesterdays cable: “Lieutenant Campbell flew over the enemy’s lines and while there saw a German two–seater about to take off from an air–drotte. He up in the sun and waited until the German Machine got over our lines, then he closed in but remained at a fairly safe distance and allowed the German to fire at him until he observed that the German had no more ammunition. He then closed in and brought the machine down. Machine fell inside our lines but very near front line.” 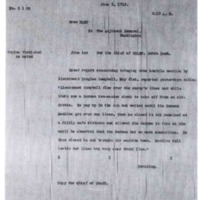