General Pershing cable Newton Baker conditions on the front and the need for additional soldiers.

To The Adjutant General, Washington.
Number 1235. Personal and Confidential.

For the Chief of Staff and Secretary of War.

Paragraph 1. Consider military situation very grave. The French line gave way before what was thought to be a secondary attack and the 8 divisions that occupied that front have lost practically all their materiel and a large percentage of their personnel, although actual number of men and guns are yet unknown. The German advance seems to be stopped for the time being. The railroads in the areas they have taken are not available for their use principally because of the destruction of the tunnel at Vauxaillon. As already reported, the infantry of our third division is being used in Lorraine and the 5th along the Marne. Our 2d division entire is fighting northeast of ChateauThierry and has done exceedingly well. It is General Foch's plan to take the divisions from behind the British attacking line as needed and use them with French artillery in Lorraine to replace French divisions for the battle.

Paragraph 2. The attitude of the Supreme War Council which has been in seession since Saturday is one of depression. The Prime Minister and General Foch appeal most urgently for trained or even untrained men, and notwithstanding my representations that the number of trained infantry in United States would be practically exhausted by the middle of July, they still insisted on a program of infantry personnel. The agreement entered into however was not entirely satisfactory as to July, but instead of sending raw infantry troops it is believed wiser to send more of the class we need for various services. I hope we shall be able to make heavy shipment of combat personnel in August and succeeding months.

Paragraph 3. The utmost endeavor should be made to keep up a constant flow of personnel to their full capacity of tonnage, and I very strongly urge that divisions be organized as rapidly as possible and be sent over entire after July, and also that auxiliary troops of all kind be shipped in due proportion. It should be fully realized at home that the time has come for us to take up the brunt of the war and that France and England are not going to be able to keep their armies at present strength very much longer.

Paragraph 4. I have pointed out to the Prime Minister(s) the necessity of both the French and British Governments utilizing every possible man at this time, including 1919 draft(s) who still lack a month or so of completing their training. Attention is called to general reference to this matter in the agreement which implies that both governments are doing this, but I am not sure however that this is the fact. It might be wise to request the respective ambassadors to urge their governments to put in every available man to meet this crisis and hold on until our forces can be felt.

Paragraph 5. In view of recent lossess........ the question of divisional artillery is also very serious. It is doubtful now whether the French will be able to supply us with the artillery we require. It is also reported that our program at home it (is?) very far behind. I most sincerely hope this is not so, as it is unlikely that France will be able to do more than meet her own requirements from now on. Will advise you more in detail later.

Paragraph 6. The urgent cables sent by the 3 Prime Ministers giving General Foch's views as to allied needs in troops and asking for an increased American program was read to me. I told them that the United States were fully alive to the necessity of doing everything possible and would do so. I can only add that our program should be laid out systemmatically and broadly and men called out as fast as they can be handled. 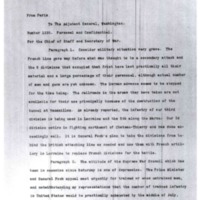