For the Chief of Staff and Secretary of War.

While relatively small the affair at Cantigny on the 28th Was well planned and splendidly executed. The 28th Infantry under Colonel Hansonely made the attack supported by our artillery and several additional batteries of heavy guns specially sent to the Sector for the purpose. Our Infantry reached its objective in schedule time and immediately organized its new position. It was important in this first attack that we should succeed and that we should hold our ground, especially as the French had previously taken Cantigny twice and had each time been driven out by the Germans. Under my personal direction additional troops of the 18th Infantry and 26th Infantry were at once brought up to support the line. Five stong counterattacks were made by the Germans all of which were dissipated, leaving prisoners in our hands. Our Staff work was excellent and the Liaison perfect. Twenty minutes after the new position was reached the information was at division headquarters and soon thereafter telephonic communication was established and maintained. The Allies are high in praise of our troops. This action illustrates the facility with which our officers and men learn, and emphasizes the importance of organizing our own divisions and higher units as soon as circumstances permit. It is my firm conviction that our troops are the best in Europe and our Staffs are the equal of any. 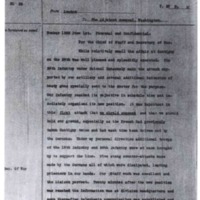