FULL COPY OF CABLEGRAM
Received at the War Department
Cable CompanyNo. 3CO
From London
To The Adjutant-General, Washington.
Number 1127 Confidential.

For the Chief of Staff. The following has been received from a reliable and highly confidential source: "During the last two weeks French and German delegates have been discussing in Switzerland arrangements for the exchange of prisoners of war. The chief results of the conference are well known. Something took place however during the conference which concerns all the powers. Germany made a mysterious concession with regard to Alsace Lorraine. This concession has been kept secret. The French representatives succeeded in securing the insertion in the final minutes of the conference a clause stipulating that "Among prisoners now interned who are to be liberated by the belligerent governments the nationality of the inhabitants of Alsae Lorraine shall not be confounded with that of the subjects of the German Empire." The clause was not accepted until after special deliberations in Paris and in Berlin, the French delegates returning expressly to Paris to discuss the point with M. Clemenceau."
Pershing. 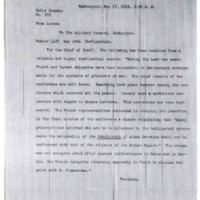