FULL COPY OF CABLEGRAM Received at the War Department
Cable CompanyNo. B2CO
From GHQAEF
To The Adjutant-General, Washington.

For Chief of Staff Section A. American Official Communique.
Paragraph) In Lorraine patrolling was active and there was again increase of artillery fire. Otherwise the day was quiet at point occupied by our troops.
Section B.(Paragraph) Particulars concerning bringing down hostile aeroplanes reported yesterday at about noon , aviators were waiting for French general who was coming to confer decorations. While waiting, Captain Peterson made an ascent and encountered two German planes and shot down both within one minute, firing 60 shots at first and 15 at second. First plane burst to flames before hitting ground and wings of second were seen to crumple up when nearing earth. No definite information concerning third hostile plane reported brought down.(Paragraph) Now determined that our aeroplane reported yesterday as having accidentally fallen within our lines north of Toul was shot down, probably by hostile anti-aircraft guns.(Paragraph) In the course of debate in the British House of Lords , British Minister of Information discussing measures for home propaganda, expressed the hope that moving pictures designed for propaganda will soon be witnessed by 12 million persons weekly. Four million copies of Lichnowsky's memorandum already sold. Official attitude towards pacifists defined by taking action only in cases of flagrant violation of law, since unnecessary interference with freedom of speech tendered to strengthen Section C. Confidential Rush. Aside from local actions and artillery activities by both sides there is nothing of importance to report.
Following is the change in German order of battle: fourth army, 56th relieves 47th reserve. The identification of the sixth Bavarian reserve at Ghent on appears to be in error. Sixth Bavarian reserve is in 18th army. Sixth army, 235th withdraws from front. Sector taken over by extension of the front of 36th reserve. 239th from reserve to army detachment A. 17th army, 16th reserve from second army, in reserve. Second army, 16th reserve from reserve to 17th army. Thirty-seventh reported as in line at Thiepval, does not now appear to be there, and is to be considered as still in reserve in 18th army. 109th in line, in sector credited to 19th. The relief of the 109th by that of the 19th reported did not take place. Eighteenth army, 50th from line, to third army. Its sector is taken by third Bavarian. 37th erroneously reported in 2nd army, presumed to be still in reserve. Sixth Bavarian reserve relieves 222nd.
The following is distribution by flight of German air force on different fronts: Flanders, pursuit 9, bombing 6, protective 2, reconnaissance 9, total 26; Armentieres battle region, pursuit 13, bombing 3, protective 8, reconnaissance 16, total 40; Arras salient, pursuit 7, bombing none, protective 7, reconnaissance 20, total 34; Bapaume Moreuil region, pursuit 10, bombing none, protective 3, reconnaissance 18, total 31; Moreuil Noyon region, pursuit 12, bombing 12, protective 11, reconnaissance 25, total 60; Laon region, pursuit 8, bombing 3, protective 3, reconnaissance 20, total 34; Rheims region, pursuit 2, bombing none, protective none, reconnaissance 6, total 8; Champagne, pursuit 4, bombing none, protective none, reconnaissance 7, total 11; Verdun region, pursuit 2, bombing none, protective none, reconnaissance 9, total 11; Woevre, pursuit 3, bombing none, protective 1, reconnaissance 7, total 11; Lorraine pursuit 2, bombing none, protective none, reconnaissance 6, total 8; Alsace, pursuit 1, bombing none, protective none, reconnaissance 9, total 10. The most noteworthy points of the distribution are the presence of 9 protective or battle flights within 25 kilometers of Mont Kemmel, and 12 bombing flights near the Somme. The authorized strength of flights now is, 18 for pursuit, 12 for bombing, 12 for protective and 9 for reconnaissance with divisions, 6 for others. Including flights not definitely located and those on other fronts, the German air forces are credited with the following strength in airplanes: pursuit 1040, bombing 280, protective 450, and reconnaissance 1800.
Latest information indicates restriction of bombing units to night work, special importance being attached to operations against billets, transportation centers, and supply depots. Protective flights are now commonly known as battle flights, and are used mainly for low flying operations against troops by day. One reconnaissance flight is assigned to each division on the battle line. Its duties consist mainly of observation, regulation of artillery, and infantry liaison. It only does photography of special objectives which are of immediate importance. Special order flights known as Mosaic section are attached to German army to do photography along its front. Reconnaissance units equipped with special order machines are assigned to army and general headquarters for long distance missions. From statements of agents and prisoners it appears that Germans are paying considerable attention to development of giant airplanes, having a large fuel and bomb capacity and capable of operating against London, Paris, and ports of embarkation and debarkation, also of small armored machines for use against ground troops in battle. In recent battles........... British airplanes have been used with great success against ground troops. The Germans have lost many of their leading aviators in the recent offensive. Statements of prisoners indicate a lowering in morale of enemy's flying service.
We now have on the front three pursuit and two observation squadrons. Plan provide for a further increase of 4 pursuit, 7 observation, and one bombing within a month. Our squadrons are composed of 18 machines each.
Section D. Confidential. Rush.
British War Office reports publication by Chilean Government of telegRAM S sent to Germany by Count Luxburg. In this order given that Chilean military attache at Berlin who was returning to Chile via Buenos Aires should be helped in every way to carry out propaganda in military circles in Argentine Republic and Chile. German Minister has published denial of the receipt of the telegRAM S and suggests falsification or mistranslation. British War Office remarks on great extent of German intrigue and influence in Chile and believe pro-German sympathies or fear of Germany prevents Chilean foreign office from publishing other Luxburg cables probably in their possession.
Pershing. 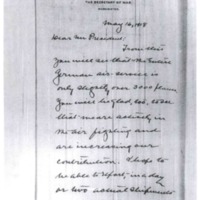