Paragraph 1. In order that the War Department may be fully informed as to the present disposition of our forces in France and of the assistance now being rendered the Allied armies by those forces, the following summary is given.
Subparagraph A. On , two days before the German offense began, there were in France 296,819 officers and men, of which 167,672 were combatant troops, represented by 4 combat divisions, 1 replacement and one depot division and regiment of Infantry-colored troops-serving with the French.
Subparagraph B. At present there are in England and France, 466,412 officers and men, of which 290,765 are combatant troops. To these should be added 21,912 en route from ports of debarkation giving a grand total of 488,224. The combatant troops are represented by the following complete divisions: 1st, second, 3rd, 26th, 32nd, 41st, 42nd, and 77th and the following incomplete divisions; 5th, 28th, 35th, 82nd and 93rd. There are also 203 brigades of heavy coast artillery, the 74th Gas and Flame Engineers, 4 regiments of Cavalry and certain special troops giving a total of 290,765 officers and men.
Subparagraph C. Organizations serving in American divisional sector are; first division, second division, 26th division, 42nd division, 1 brigade Heavy Artillery. A total 4,100 officers, enlisted men 98,989. These organizations are tactically under the French Corps Sector Staffs, but for administration, replacement and supply are under our own first corps headquarters.
Subparagraph D. The first division is in the Picardy battle near ; the second division holding a sector near , but troops withdrawn within a few days (being replaced by a used French division) and take position on the Picardy front; the 26th division is holding a sector north of and the 42nd division is holding a sector near . The 32nd division which, because of the present emergency, has been reconstituted from a replacement to a combat division, will shortly enter the line in a quiet sector and relieve further French troops. Divisions being approximately double the strength in infantry of a French division we are taking over a length of front in proportion to the strength of our troops, thus relieving double the number of French divisions from the line for participation in the Picardy battle.
Subparagraph E. The Infantry and machine gun units of the 77th division which have arrived from British area, are receiving preliminary training preparatory to entering the line by battalions in British brigades for initial trench training. The 35th and 82nd divisions are now arriving and will undergo training with the British preparatory to entering the line under the same condition as the 77th division. We have sent to the British the following auxiliary troops; 4 regiments railroad Engineers, 1 regiment pioneer Engineers, 1 battalion Forestry Engineers, 1 telegraph battalion Signal Corps and six Base Hospitals; also 9,826 officers and men of the Air Service (4 aero squadrons being at the front).
Subparagraph F. The French have had turned over to them 4 negro regiments, of the 93rd division, approximately 5,500 motor mechanics, 6 machine shop truck units and 80 sections of the United States Ambulance Service.
Subparagraph G. To accomplish the above, the core squadron service of supply has contributed every available unit not absolutely essential to continue the operation of our supply service.
Subparagraph H. The following organizations are now undergoing training; the 3rd division; the 5th division, less its artillery which has not yet sailed; the 41st division (depot) which is composed of necessary personnel only and administration of newly arriving replacements; heavy artillery, consisting of 31st and 32nd artillery brigades, which arrived during the past month and are in training and the 54th heavy artillery regiment which has been designated as a replacement for those brigades; the artillery of the 77th division. Total for training and replacements officers 5,500, enlisted men 101,600.
Subparagraph J. Service of supply troops total 140,049. Combatant troops attached to service of supply include 4 cavalry and two infantry regiments, 1 Engineer regiment and two ammunition trains. Total 16,885.
Subparagraph K. Troops with the British in training 34,534, of which 27,960 are infantry, the rest special units. Troops in service with the British 11,410, of which are special units, giving a total of 45,744.
Subparagraph L. Troops with the French in training 8,199, infantry. Troops with the French in service 12,234, of which are special units. Total 20,423.
Subparagraph M. Recapitulation. In service. Serving with American sector of the line 103,089; service of supply troops 140,049. combatant troops used in service of supply 16,885; serving with the British 11,410; serving with the French 12,234; total 283,667. In training. In American training areas, including aviation, 133,534; with British forces 34,354; with French forces 8,199; total 176,067. En route from ports of debarkation to join American Expeditionary Forces and British Expeditionary Forces, 21,812; sick and detached, 6,678; making a grand total of 488,224.
Subparagraph N. In addition to the assistance being given to the French and British in the form of infantry and special troops, as has been enumerated herein, our troops are actually holding 35 miles of the front line. The significance of these facts can be better appreciated it is realized that this is more than double front held by the Belgian Army and more than the front held by the British during the first year of the war.
. 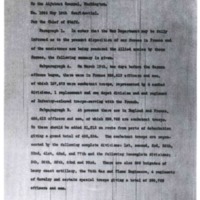