Washington .33 CO5.24 P.M.
From ParisTo The Adjutant-General, Washington.
No. 1042. Confidential.
For the Chief of Staff and Secretary of War. Following agreement adapted by Supreme War Council at Abbeville. Will cable more in detail later. "It is the opinion of the Supreme War Council that, in order to carry the war to a successful conclusion, an American army should be formed as early as possible under its own commander and under its own flag. In order to meet the present emergency it is agreed that American troops should be brought to France as rapidly as allied transportation facilities will permit and, that as far as consistent with the necessity of building up an American army, preference be given to infantry and machine gun units for training and service with French and British armies; with the understanding that such infantry and machine gun units are to be withdrawn and unite with its own artillery and auxiliary troops into divisions and Corps at the discretion of the American Commander in Chief after consultation with the commander in chief of the allied armies in France.
Subparagraph A. It is also agreed that during the month of May preference should be given to the transportation of infantry and machine gun units of 6 divisions, and that any excess tonnage shall be devoted to bringing over such other troops as may be determined by the American Commander in Chief. Subparagraph B. It is further agreed that this program shall be continued during the month of June upon condition that the British Government shall furnish transportation for a minimum of 130,000 men in May and 157,000 men in June with the understanding that the first 6 divisions of infantry shall go to the British for training and service, and that troops sent over in June shall be allocated for training and service as the American Commander in Chief may determine.
Subparagraph C. It is also further agreed that if the if the British Government shall transport an excess of 150,000 men in June that such excess shall be infantry and Machine gun units, and that early in June there shall be a new review of the situation to determine further action." Pershing. 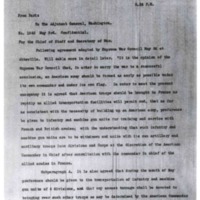