My dear Mr. Secretary
Thank you for your letter of the first about sending men to Italy. General Bliss's message about the matter seems to me singularly just and comprehensive in its appreciation of the many things involved, and I hope that you will take the action which you suggest, namely, ask General Pershing to suggest to General Foch, or General Petain, and to Sir Douglas Haig, that some of the American troops be brigaded with their several divisions in Italy with the explanation that our hope is that American soldiers may appear on the Italian front under the circumstances which will not create the expectation that we can send further forces at the present time or an independent American force at a later time. 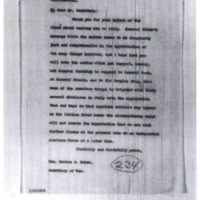