The Adjutant General, Washington
Number 219 September 15th.
Secret. Rush
For the Secretary of War and the Chief of Staff.

Please inform the President that the Secretary of War showed me last night just at moment of his departure for London a note from Mr. Clemenceau to Mr. Pichon intended to be sent by the latter to the President asking for reinforcements of 5 American battalions to be sent to Archangel, Russia. The Secretary of War requests the President to defer action on this request until he hears from him at London. For your information I add that British Government several days ago requested military representatives to consider question of sending reinforcements to Archangel. After full and careful consideration the military representatives at meeting yesterday unanimously agreed that their professional judgement was opposed to sending more reinforcements to north Russia this year and they telegraphed this opinion last night to British Government. 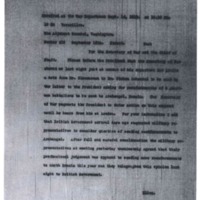