FOR THE CHIEF OF STAFF:
The following received from American Legation, Copenhagen through Slocum. "Following is a press statement of the ban issued October 5th last by German press headquarters. Turning point of war took place July 18th. Since then Central Powers reduced to defensive on all fronts and allied offensive extended to all sectors of fronts. Entente offensive has attained its highest point and the decision of the world is nearing maturity. Struggle against half the world is increased by fact that Germany's few allies are deserting her one by one. A whole continent excellently organized has risen and America is throwing both men and materials into the fight in an incredibly short time. On the other hand Germany's resources and reserves of men are exhausted and no new hopes are in progress. War must therefore and will end before long. Ludendorff's remaining task is to stop Hindenburg line from being broken and dislocated and same is already penetrated. Belgians have made a break in Flanders 12 kilometers in depth. Question of evacuation of Lille will be acute if the front continues to be pushed back here. Furthermore there is always chance of an offensive in Alsace. This three months ago would scarcely have been believed. A sombre future awaits us if a new.... does not bring an early peace".
Pershing. 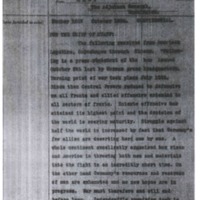