The whole heart of the United States is in the winning of this war. The controlling purpose of the Government of the United States is to do everything that is necessary and effective to win it. It wishes to cooperate in every practicable way with the allied governments, and to cooperate ungrudgingly, for it has no ends of its own to serve and believes that the war can be won only by common counsel and intimate concert. It has sought to study every proposed policy or action in which its cooperation has been asked in this spirit, and states the following conclusions in the confidence that, if it finds itself obliged to decline participation in any undertaking or course of action, it will be understood that it does so only because it deems itself precluded from participating by imperative considerations either of policy or of fact.

In full agreement with the allied governments and upon the unanimous advice of the Supreme War Council, the Government of the United States adopted, upon its entrance into the war, a plan for taking part in the fighting on the western front into which all its resources of men and material were to be put and put as rapidly as possible, and it has carried out that plan with energy and success, pressing its execution more and more rapidly forward and literally putting into it the full energy and executive force of the nation. This was its response, its very willing and hearty response, to what was the unhesitating judgment alike of its own military advisers and of the advisers of the allied governments. It has concentrated all its plans and all its resources upon this single absolutely necessary object.

It feels it to be its duty to say, in such circumstances, that it cannot, so long as the military situation on the western front remains critical, consent to break or slacken the force of its present effort by diverting any part of its military force to other points or objectives. The United States is at a great distance from the field of action on the western front; it is at a much greater distance from any other field of action. The instrumentalities by which it is to handle its armies and its stores have at great cost and with great difficulty been erected in France. They do not exist elsewhere. It is practicable for her to do a great deal in France; it is not practicable for her to do anything of importance or on a large scale upon any other field. The American government, therefore, very respectfully requests its Associates to accept its deliberate judgment that it should not dissipate its force by attempting operations elsewhere.

It regards the Italian front as closely coordinated with the western front, however, and is willing to divert a portion of her its military forces from France to Italy if it is the judgment and wish of the Supreme Command that it should do so. It wishes to defer to the decision of the Commander-in-chief in this matter, as it would wish to defer in all others, particularly because it considers these two fronts so closely related as to be practically but separated parts of a single line and because it would be necessary that any American troops sent to Italy would have to should be subtracted from the number used in France and be actually transported across French territory from the ports now used by the armies of the United States.

It is the clear and fixed judgment of the Government of the United States, arrived at after repeated and very searching reconsiderations of the whole situation in Russia, that military intervention there would add to the present sad confusion in Russia rather than cure it, injure her rather than help her, and that it would be of no advantage whatever in the prosecution of our main design, to win the war against Germany. It cannot, therefore, take part in such intervention or sanction it in principle. Military intervention would, in its judgment, even supposing it to be efficacious in its immediate avowed object of delivering at attack upon Germany from the east, be merely a method of making use of Russia, not a method of serving her. Her people could not profit by it, if they profitted by it at all, in time to save them from their present distresses, and their substance would be used to maintain foreign armies, not to reconstitute their own. Military action is admissible in Russia now, as the Government of the United States sees the circumstances, only to help the Checho-Slovaks consolidate their forces and get into successful cooperation with their Slavic kinsmen and to steady any efforts at self-government or self-defense in which the Russians themselves may be willing to accept assistance. Whether from Vladivostock or from Murmansk and Archangel, the only legitimate object for which American or allied troops can be employed, it submits, is to guard military otor stores which may subsequently be needed by Russian forces and to render such aid as may be acceptable to the Russians in the organization of their own self-defence. For helping the Checho-Slovaks there is immediate necessity and sufficient justification. Recent developments have made it evident that that is in the interest of what the Russian people themselves desire, and the Government of the United States is glad to contribute the small force at her disposal for that purpose. It yields, also, to the judgment of the Supreme Command in the matter of establishing a small force at Murmansk, to guard the military stores at Kola and to make it safe for Russian forces to come together in organized bodies in the north. But it owes it to frank counsel to say that it can go no further than these modest and experimental plans. It is not in a position, and has no expectations of being in a position, to take part in organized intervention in adequate force from either Vladivostock or Murmansk and Archangel.It hopes to carry out the plans for safe-guarding the rear of the Checho-Slovaks operating from Vladivostock in a way that will place it and keep it in close cooperation with a small military force like its own from Japan and that will assure it of the cordial accord of all the allied powers; and it proposes to ask all associated in this course of action to unite in assuring the people of Russia in the most public and solemn manner that none of the governments uniting in action either in Siberia or in northern Russia contemplates any interference of any kind with the political sovereignty of Russia, any intervention in her internal affairs, or any impairment of her territorial integrity either now or hereafter, but that each of the associated powers has the single object to of affording such aid as shall be acceptable, and only such aid as shall be acceptable, to the Russian people in their endeavour to regain control of their own affairs, their own territory, and their own destiny.

It is the hope and purpose of the Government of the United States to take advantage of the earliest opportunity to send to Siberia a commission of merchants, agricultural experts, labour advisers, Red Cross representatives, and agents of the Young Men's Christian Association accustomed to organizing the best methods of spreading useful information and rendering educational help of a modest sort, in order in some systematic way to relieve the immediate economic necessities of the people there in every way for which opportunity may open. The execution of this plan will follow and will not be permitted to embarrass the military assistance rendered in the rear of the westward-moving forces of the Checho-Slovaks. 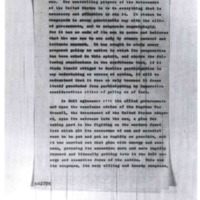