Extract from cablegramReceived at the War Department, June 30, 1917, 5:40 p.
M.9:00. Paris.
The Adjutant-General,Washington.xxNumber 23. Paragraph 3.Reuter's Agency has violated French censorship rules and account arrival our troops was published in London papers June 27th . All other newspaper men unequivocally condemn correspondent's action. American and French correspondents have behaved in splendid fashion. In view of publicity given by London papers have authorized release of news by all other papers except as to place of landing. Such publicity will probably indicate to enemy that entire convoy has arrived and therefore believe no harm will be done. Am having action of correspondent investigated and will ask French Government to take summary action. Am also sending an officer to British War Office in endeavor to establish thorough understanding directly between ourselves and Government regarding censorship of newspaper correspondents.Pershing. 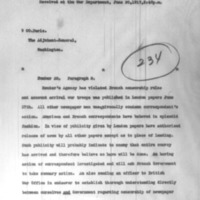