The Japanese-American question which calls for an immediate adjustment, is that of the treatment of the resident Japanese in this country. What Japan desires is nothing more than the enjoyment of the most favored nation treatment. That desideratum may be attained, in my personal opinion, by the adoption of some of the following means.
1. By Treaty.
a. By concluding an independent treaty, mutually guaranteeing to the citizens and subjects, the most favored nation treatment, in matters of property and other rights relative to the exercise of industries, occupations, and other pursuits. Negotiations in this line, were for some time conducted between Secretary Bryan and Ambassador Chinda, which, however, for reasons I need not here state, have since been in abeyance.
b. By revising the existing commercial treaty between our two countries, so as to conform, in its stipulations, to similar engagements between Japan and various European powers, which guarantee in principle, the most favored nation treatment, in the enjoyment of property rights and in all that relates to the pursuit of industires, callings and educational studies.
2. By American legislation.Although the subject is not fit for international discussion, it may be mentioned that a constitutional amendment restraining any state from making and enforcing any law discriminatory against aliens in respect to the property and other civil rights, will prove a far-reaching remedy. In fact a resolution with the same object in view has, I understand, been introduced in Congress lately.In this connection, I may state the fact that the provisions of racial distinction in the present naturalization law, were in a number of instances, made use of for the purpose of depriving Japanese subjects of the rights and privileges of a civil nature. Although the wisdom of the law is in itself a matter of national and not international concern, the unfortunate circumstance that certain provisions of that law furnish a pretext for the impairment of alien rights, should, I may be allowed to remark, constitute a fit subject for legislative attention.The comparative merits of each means should be studied by both Governments in the light of expediency and feasibility. Whether the adoption of any one means will be sufficient to cover the whole ground is a matter upon which precaution forbids me to pass a final judgment at present, but I am strongly convinced that each means will go a long distance towards a complete solution of the question.
Before concluding, I desire to touch upon the subject of immigration. The question whether Japanese laborers shall be admitted or not, has been consummately solved by the continued faithful observance by Japan of the so-called Gentleman's Agreement. So far as the Japanese Government is concerned, it is no longer in the realm of living questions, and in my view, it would serve the best interests of both nations to leave the question as it is. 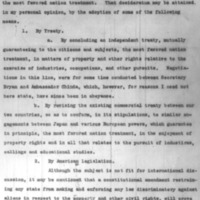