A discussion of suitable candidates from the socialist party to accompany the Russian committee.

Dear Sir:-
I notice that the talk of a socialist delegate to accompany the Russian committee still continues.

I have already written you of the fatal consequences of even mentioning Mr. Victor Berger's name in this connection. There is no doubt but that he and Mr. Morris Hilquit are both favorable to peace between Germany and Russia if they are not indirectly involved in intrigues to that end. I do not say this with any willingness for both have long been friends of mine, but they are so frantically pro-German that they believe such action justifiable.
On the positive side, permit me to suggest the name of Mr. Arthur J. Bullard, well known as an author and magazine writer. His book on “The Diplomacy of the Great War” is generally considered by critics to be one of the ablest works the war has produced.
The important thing however is, that from the moment he landed in Russia he would be subject to an ovation, little smaller than that given to La Fayette on his visit to the U.S. There is no man in the world, outside of Russia, so highly thought of by the Russian socialists as Mr. Bullard. He was active throughout the revolution of 1906, knows all sections of the Russian socialist movement and at the same time thoroughly understands all the intricacies of European diplomacy.
He is thoroghly pro-American although able to view things impartially when necessary.
Although he has not been active in socialist party politics, he has long been an active socialist and would have the confidence of every American socialist. The only ones who would be opposed to him would be the pro-German machine.
I am not at all certain if he could be reached. It is possible he may be on one of the war fronts as a correspondent, but his publishers, MacMillian and Co., of the “Outlook” could locate him for you.
If you wish to know more about him I would suggest that you consult Ernest Poole, Leroy Scott or William English Walling, all of whom are prominent socialists, and who are especially familar with the Russian situation; and any of whom would be acceptable if Mr. Bullard is not available.
Trusting you will pardon this suggestion, I am

Yours sincerely,
(Signed) A. M. Simons 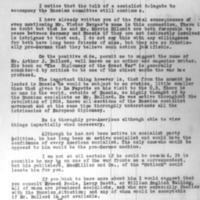