WHL-SAs suggested by you this morning, I have prepared, and enclose herewith, the form of an amendment to the proposed Bill “to authorize the President to increase temporarily the Military Establishment of the United States,” which would preserve intact the National Guard of the various States after they have completed service in the army of the United States through the proposed draft. This amendment would simply leave the time of service in the army of the United States to run concurrently with the enlistment in the National Guard during the time of employment in the Federal service. 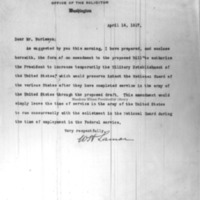