Ellen Axson Wilson tells Jessie Wilson Sayre about home renovations and going to the theater with her husband.

I have,—much against my will,—been a very poor correspondent so far this fall; but I am going to do better from now on, for I think the great work of the season is finally over. May finished her work last night and left this morning “forever,”—as you girls say! She is to be married on the 14th of next month.Miss Williams also left this afternoon. She came last Saturday and has had me posing for her all the week whenever it was possible. She has almost painted the picture over, and it is immensely improved. We all think it fine now.
There is still a good deal of superintending to do in the garden but the work is well under way, and all the “stock” chosen, ordered,—and on the spot. It is certainly fascinating;—I should like to be out there all the time, especially in this lovely Indian summer weather. It has been a splendid fall and the garden has been a wonder. We still get all the flowers we want from it,—clove pinks and fine American Beauty roses for instance. Isnt that surprising for November?Madge has really sailed this week,—on Wed at eleven o'clock. She went over the day before, and Papa and I went on the special that morning. There was quite a party to see her off, and she had about a score of letters & some fine flowers. They had nice little state-rooms with no upper berths at all! But the ship looked rather small and dingy by comparison with the Eng. & German ones. It is Italian, you know? Miss Thorpe has tried them often and likes them best.
After eleven I went up to the Presbyterian hospital to see Miss Rickitts who, you know, was operated on for appendicitis two or three weeks ago. She is doing finely and I found her very bright—After that Papa and I went on a regular spree! We went to the theater in the afternoon and saw “The College Widow,” a regular foot-ball play! I don't know when I have laughed so much. All the parts were acted splendidly. Then we staid over night and went in the evening to see Mrs. Campbell in “The Sorceress.” She is very powerful and effective in it; but the play is a terrible and unmitigated tragedy. So we had “all sorts of a time” that day.
We all enjoyed your account of the house-party extremely. I am charmed that you had such a treat and that all went off so well. Also that you are succeeding so well as you evidently are as president. Your days,—everybodys days—at college certainly do seem too full, and it makes me uneasy sometimes for you both. But the mere fact of your all being Americans,—in America makes that inevitable,—alas!I am confused about your allowance. Did I send it last for Oct. or Nov.? I have been so busy that it has been crowded out of my memory. Drop me a card & I will send it at once if I owe for Nov.,—and also the money for you to come home at ThanksgivingThis is my “day” and I have been trying to write between calls, but they finally settled down to a steady stream of visitors so now I must stop & hurry this off, as it is already so late in the week. With a heart full of love for both my darlings from, 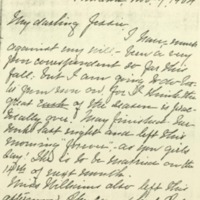