Eleanor Wilson McAdoo writes Jessie Wilson Sayre and Margaret A. Wilson with social news, and to thank them for her birthday letters.

Please, please forgive me for not writing to you last Sunday or not answering both of your dear, dear birthday letters that you sent me. Thank you so much for them, they were just dear.
Last Sunday was not at all like other Sundays and so I guess that was the reason I didn't write.Mr. and Mrs. Bryce a distinguished Englishman and his wife were here visiting us, and we had a dinner for them Saturday night and then Mr Fine and Mr West in to dinner on Sunday night. It was dinner and not supper and so it lasted much longer and then somehow I was tired and just didn't write.
I had a lovely birthday and birthday party, though of course I didn't have them the same day, for the very good reason that my birthday was, as you know, on Sunday. I got a lovely picture to fill up the place of the one you, Jessie, took away, and a beautiful red silk waist, and the darlingest little bag, and three books, “The Maids of Paradise,” “The Faringdons,” and “The Flower of Youth.” And then best of all, I'm going to get a lovely Princeton flag! It hasn't come yet but it's been ordered and it will be here in time for the Yale game,!!! Won't that be fine?Then I had my birthday party on Wednesday, and it was piles of fun. It wasnt a real party, I just had Beth and Duffie and Susie and Elizabeth Robinson to dinner, and Elizabeth stayed all night. We danced and played games in the evening and Elizabeth and I talked until the clock struck twelve. Weren't we wicked? But it was lots of fun. I wore my pink dress for the third time.Duffie is going to give a Halloween party next Monday, and she sent around the weirdest invitations, inviting us to “Ye House of Ye Sign of Ye Black Cat,” on “Witch Night” and telling us to bring an old sheet and pillow case and to wear our old clothes. I guess it is going to be very exciting.nNow I'll begin on the subject I very seldom leave out of my letters, namely, foot ball. I hope you are both interested in the subject, if you aren't, just mention the fact and I will immediately “cork up”.
I will first begin with sad news and then end up with bright.—Annapolis beat us last Saturday, ten to nine!!!!! Wasn't that awfully tragic? Our team was certainly not up to the mark that day and played a pretty poor game but the defeat was really caused by a fumble by Burke and a failure to kick a goal. They have been getting perfectly desperate lately trying to find a single man in the team who could kick a goal, and finally yesterday in the Lehigh game, they tryed Cooney and he prooved to do it splendidly and never failed once in the ten touch downs we made. It was a perfectly lovely game, although towards the end it began to get rather dull, as you would naturally expect when the score is sixty to nothing!Foulke, our captain, made five of the touchdowns, and Ritter, the great Lawrenceville player, now a freshman here, made about four.
I have only been to two games this year and yesterday's is the last one played here before the yYale game. It comes earlier than usual this year because we have played fewer games, for some reason or other, I don't know why.
We play West Point, next week or the week after, I don't know which, and I guess it will be very exciting, because yesterday they beat Yale, eleven to six!!Well, that's two whole pages on foot ball and I guess you've had enough, so Ill stop except to say, Dont you envy me, seeing the Yale game when you can't?Well; I guess this is al a long enough letter for the present; and even if it wasn't, I couldn't help it, because I havent anything more to say. So, goodbye little darlings. I just am so lonely with out you and I just wish so you were here. Every body sends lots of love especially Miss Fine, and every body is so glad Jessie's president.
Every one of us is perfectly well and we all send just piles upon piles of love to both of you darlings.
Goodbye again, sweeties. 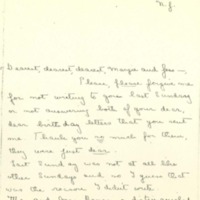