Eleanor Wilson McAdoo writes Jessie Wilson Sayre in Italy with news from Princeton, and to wish Jessie well on her recovery.

My own darling little precious Jess

We were so glad to get the cablegram yesterday saying that you were all well.
I am just so glad, darling! Do please stay well and come home soon, precious.
We got a letter from Margaret a little while ago, saying that she was alright and that her eyes were holding out very well. Isn't that good?Mine haven't troubled me in the least.
I have been having a very gay time these last few days namely—FridayanSaturday. So gay that I have not had time to get all of my lessons for Monday done and must get up early in the morning to-morrow.
Friday morning I went to school and then in the afternoon went to the play. You know The Ben Greet company has been here again and acted “mMuch Ado About Nothing” on Satu Friday afternoon. It was just lovely and Miss Mathison was too lovely for words. She was simply perfect as Beatrice and just perfectly beautiful. She had on the loveliest sort of golden dress with lovely jewels on it and she acted splendidly as she always does.Ben Greet was Benedick and acted very well too, although I wish he hadn't been quite so ugly.
Then in the evening the had “Midsummer Night's Dream” That too was lovely, although there wasn't enough for Miss Mathison to do. She was Helena and another actress, Agnes Scott, was Hermia.
They had a troupe of the dearest little children as the fairies. They came Friday morning, and in the afternoon while the others were acting “Much Ado About Nothing” they went on a picnic to Potter's Woods. A little tiny girl was Titania and she was simply fascinating. She was awfully pretty and knew her part perfectly. She knew her own part and the other's too, because she prompted Oberon several times. Oberon was another girl, a little older than Titania but she didn't act near as well, and you ought to have heard that tiny thing prompting the other one.
She had to tell the other little fairies what to do too, and you could hear her saying in a whisper, “Stand up.” or “Sit down.” or once when Bottom made a remark the o fairies were to laugh. But they forgot and there was a dead silence. Then she said, “Laugh” and they all gave a little constrained giggle,. She certainly was dear.Miss Mathison acted well finely too, as she always does. Then Saturday evening they went to acted “As You like It” again which they did splendidly and just as well as last year.
I didn't expect to go to that at all and was over at Beth's to supper when Anna came running over and told me to come home because Uncle Stock was going to take me. Wasn't that lovely?Then, Saturday afternoon there was the Pennsylvania game, which we beat I am glad to say—7–4.
It was very exciting. Our men certainly did improve in the batting. They had a terrible pitcher untill about the sixth inning and until then the score washim running around the bases, because you know he can't run fast at all and looks too funny when he is running. Just like a big ugly old elephant. But it certainly was a pretty hit! I hope you don't mind my talking so much about baseball, but I know you're interested in it and like to hear about the games I had my last drawing lesson last Saturday or rather yesterday and I am not so very sorry, as it was rather lonely with out you.
How do you like the place you're in,? I wouldn't dare write the name because I haven't any idea how to spell it, Mrs Hibben says that it is perfectly lovely.
How is dearestMamma. I am so glad that she can see the pictures in VeniceFlorence. I hope that you can see them too.
We have an awfully nice minister here this Sunday, a Doctor Cecil. He is a from Richmond and has a son, a senior, in college.
He has been to three meals here, as dDoctor Cecil has been here since Saturday morning, and he is very nice. He and Satur Satterwhihte, the nice Southerner that is a substitute on the baseball team, are room mates Well I must stop now as I must write to Margaret and I want to get to bed early because I must get up so early tomorrow. So goodbye, my precious.
A whole heartful of love to darling Mamma and to yourself, with lots of love from all. 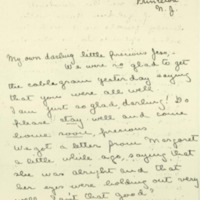