It, has seemed ages since I last wrote, although it really isn't.
I hope you will have gotten my other letter before this one gets there.
Are you still having a lovely time? I am sure that you must be.
I am going to start to school again to-morrow and am rather scared because of the lessons I will have to make up, but I guess it won't be very terrible. I am going to take all your letters to Miss Fine to-morrow morning and and let her read them, because she begged me to let her. You don't mind, do you? I am sure that she will enjoy them so because you certainly do write lovely interesting letters, darling.Susie just came back from “Tom's River” last night. She is perfectly well now except that she is not quite strong. I have found out that dancing school wasn't on last Wednesday, becauseMrs Lewis was sick and so it is going to be next Wednesday and I can go. Wasn't that nice? Not that Mrs Lewis was sick but that I can go.
I went to my first base ball game yesterday! It was between Cornell and Princeton and the score was 2–1 in favor of Princeton!It was a very exciting game as it was nothing to nothing until the seventh inning.
Both teams did very well and it certainly was an close shave, because Cornell often had men on first third and second bases and only one or two men out.Underhill pitched. I don't know why Stevens didn't They have put Bard on first base in place of Pearson and Satterwhite is short stop.
He is a very good player but runs to many risks and often gets put out when trying to steal a base.
But I guess this doesn't interest you very much so I'll tell you something else.
We had a very nice and interesting minister here this—Sunday—Dr Sparhawk Jones.
There, I've gone and written on the thick paper again! Please excuse me?Well as I was saying he is just as nice as he can be and so interesting.Papa says that he preaches a fine sermon but the Hibbens couldn't hear him at all because he talked so low. Wasn't that a pity? We had a Mr Hutton, not Lawrence Hutton, preach in our church and he was very interesting.
We had a solo too wich which was simply fearful The Faculty song has come out now and some of them are very funny. Papa's is just the same as last year. Mr and Mrs Hibben and Beth are provoked because of Uncle Stock's. This is what it is:Here's to Axson smooth as silk
With voice as soft and sweet
as milk.
He's not too strict and not too
slack.
And he's just as white a man
as Jack.
Isn't that a nice one? Some of them are awfully mean, as usual. For instance Mr. Winans' begins—Heres to Winans, our dean retired
Did he flee? or was he fired?Now isnt that a mean one? They say that they have another one for each man which isn't published, but which they sing at Seniors Singing. We haven't heard them yet.Beth says that the Triangle club are going to act the man. “The Man from Where” this commencement again. Won't that be nice, because then we all can see it.
I'm afraid that I don't know enough abot about the Russian and Japanese war to tell you anything interesting, because I never see the paper anymore. I don't know why but I seem to have lost all interest in it.
Well, Margaret is going away to-morrow morning and I think I will go and see if I can help her pack so give my best and dearest love to precious mamma, and tell her I do hope she hasn't worried much about us because we are perfectly well now.
Give my love to all the party too and keep just piles and piles for your precious little self— 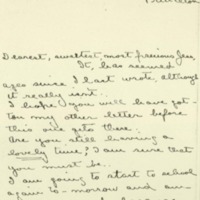