Eleanor Wilson McAdoo writes Jessie Wilson Sayre with news of some parties, and to wish Jessie well after her operation.

I miss you so much. I am so glad that the operation went off all right. I went to Dorothys party day before yesterday and had a very nice time, allthough Adelia Pyle the girl the party was given to was not very nice. Adelia has a little sister named Sarah and a little brother named Charlie. Adelia is about twelve Sarah is about ten and Charlie is about eight. They are all very pretty but I think Sarah is the prettiest.
I am invited to another party this afternoon at the Hows to meet Clarissa and Agusta Lynde. Cousin Mary came last night Papa got a telegram just before she came saying that Mr Wood, papa's old classmates little girl wa being tutored by Cousin Mary and asking papa if the little girl could come too and stay at our house, but mamma was away and Aunt Margeret is going so papa was just about to telegraph back no when Cousin Mary came but without the little girl whose name was Mary, because Mr. Wood had decided that it was to much to ask of Papa. I have made three dresses for my doll—Mrs Wilson—and I am making another one for Margeret.Margeret sleeps in your bed with me now and I eat downstairs.
It is nearly dinner time and I must stop.
Give my love to Mamma and Uncle Stock and keep lots yourself.
Good-bye darling 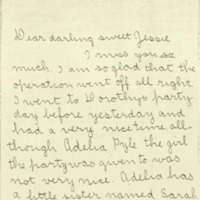