Your beautiful little presents were forwarded to me from Nashville and I must thank you many many times for them—every one of them will be very useful as well as ormental in my room here at Mannie. I know you had a fine time Christmas so it is unnecessary to ask that—and plenty of excitement too to judge by Aunt Margarets letter. I went up to Nashville for two days and spent Christmas at Cousin Hatties. They had a tree for the children Sunday night and it was great fun seeing them. Everybody became so wildly excited & made so much noise that it made me feel quite as if I were in Princeton watching Margaret and Jessie & Nellie. They all from May down formed a line in the dining room ready to march in the moment the door was openeded. Cousin Hattie, Cousin Henry and I were busy putting the finishing touches to the tree, lighting the candles &c so that they had to wait a few minutes before coming in. That few minutes delay came near causing trouble—they had all become so excited that they just couldnt wait any longer and finally it looked as if they were going to tear down the walls to get at that tree—and to quell the riot Cousin Robert had to go out and start them all singing America. When they finally got in they all stood a few moments and gazed with open mouths at the tree and then every body made a rush for the corner where most of his or her presents were to be. It was great fun. That night after they younger ones had gone to bed we filled their stockings with nuts and candy, fire crackers, horns & little things like that. Every body, grown up people and as well as the children had stockings.

Little Esmond, the youngest boy, is a funny little fellow—he made us all laugh at dinner—even his mother, though she tried to look serious and reprove him. He got up from the table before desert and started away, and when his father asked him if he didnt want any plum pudding he said “No sir—Im going to save my stomach for cake and candy this afternoon.”

They are working on my laboratory now and I expect to be in and at my regular work sometime next week. I am going to have the coziest little laboratory you ever saw—built after my plan—I wish you girls could come to visit me in it.

Prince is well and growing like a weed. I took him out in the field the other day and fired my pistol off near him to see what he would do. He wasnt at all afraid after the first time—and I think will make a good hunting dog when he gets bigger. There is an Irishman here with us, Mr Whalen the boss up at the mines. He hasnt much use for dogs and never pays any attention to Prince. So, I suppose for that reason, Prince does his best to cultivate his acquaintance. Mr Whalen cant leave his door open without Princes running in & making himself very much at home before Mr Whalen's fire. The other night when I came out from supper I met Mr Whalen coming out of my room with a tube of wax and the remains of his paper which Prince had carried off and chewed up. I scolded Prince (it was too late to whip him) but I'm afraid it didnt make much impression. When I went in I found one of Mr Whalen's shoes also which Prince had brought over and deposited in his dry goods box.

Well goodbye—let me hear from you girls. Love to all— 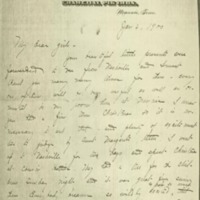