I got your letter some time ago and was of course very glad to hear from my little girl—it was a nice long one, I had no idea you could write such a long one.
I am glad you are having such a nice time down in Virginia this summer and have so many little boys and girls to play with. You must not get to liking it so much though that you wont come back to Princeton, for I want to see you all there very soon. I also have been having a nice time this summer, rowing, swimming, playing tennis and lots of other things. We go out almost every day for a sail on the Lake in a little steamboat, like the big ones in which you went to New York, only we can make it go wherever we please. We took some people on it this afternoon intending to go up to a beautiful place called Paradise Bay and have our supper on the boat. But before we got there such a storm came up (they come very suddenly here) and the waves got so high that the Captain had to run for a harbor as quick as he could to keep from being swamped. We tied up to a dock and had our supper on shore—the boat was rolling so the dishes would have slid all around if we had tried to have it on board—and afterwards we had to get horses and driver back home leaving the boat there all night. We found the people at the hotel beginning to get worried about us, it was such a violent storm—though there was not a drop of rain.
There are a number of little boys and girls here just about your age. I have made friends with most of them—two of the little girls have a good time slipping up behind me when they find me sitting in the office and hitting me on the back and running away before I can catch them—like Nellie does. They think it is a great joke. One of them presented me with a paper doll the other day.Im afraid I must stop now for one of the young people is going off in a few minutes and I have to go down to the boat to see him off. Give lots of love to Margaret, Nellie, and the rest. Tell Aunt Margaret I got her letter and will answer it very soon. With lots of love too for Jessie, 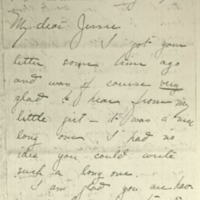