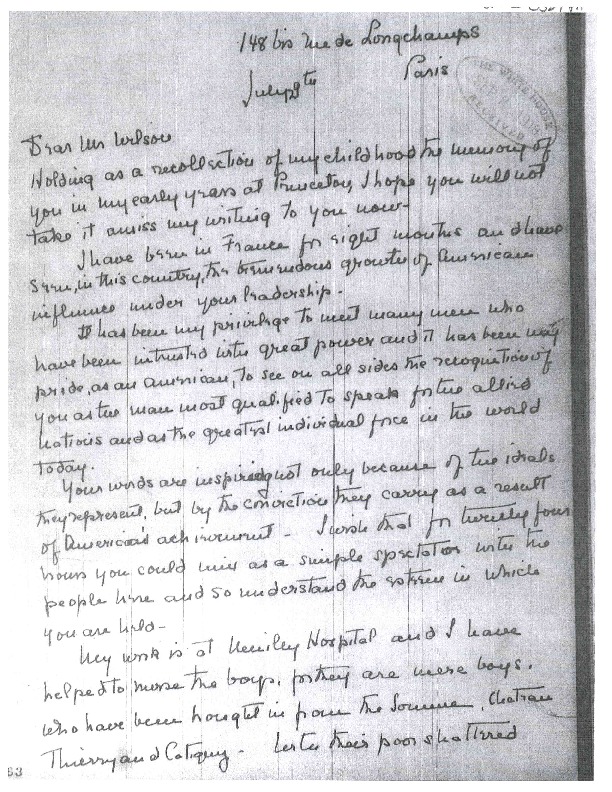 Holding as a recollection of my childhood the memory of you in my early years at Princeton, I hope you will not take it amiss my writing to you now.

I have been in France for eight months and have seen, in this country, the tremendous growth of American influence under your leadership.

It has been my privilege to meet many men who have been intrusted with great power and it has been my pride, as an American, to see on all sides the recognition of you as the man most qualified to speak for the allied nations and as the greatest individual force in the world today.

Your words are inspiring not only because of the ideals they represent, but by the conviction they carry as a result of America's achievement. I wish that for twenty four hours you could mix as a simple spectator with the people here and so understand the esteem in which you are held.

My work is at Neuilly Hospital and I have helped to nurse the boys, for they are mere boys, who have been brought in from the Somme, Chateau Thierry and Cantigny. With their poor shattered bodies and amazing courage in the fearful pain they are called upon to endure one is filled with a great gratitude in knowing that controlling the destinies of our people you fully understand the honors of war and will not prolong it one hour longer, than is necessary to realize the peace which will unite the world in such a way as to make impossible a repetition of such agonies. I can not refrain from telling you how very much I admire you and I hope you will not mind.