Wilson met Edith Gittings Reid's husband, Henry Fielding Reid, while in graduate study at Johns Hopkins University. The friendship between Wilson and Mrs. Reid began during one of Wilson's visits to Baltimore while giving a series of lectures at Johns Hopkins and was cemented by an extensive correspondence and lasting bond between their families. Reid published several books near and after Wilson's death, including Florence Nightingale: A Drama and biographies of Sir William Osler, William Sydney Thayer, and Woodrow Wilson. This collection was presented to the Woodrow Wilson Birthplace Foundation by Mrs. Woodrow Wilson.

Wilson's correspondence with Edith Gittings Reid in this collection consists of 38 letters to her and one to her husband beginning February 22, 1896. His last note was written in July, 1923, the summer before his death. The letters are arranged chronologically and pertain to literary matters as well as social and family affairs. There is little of a political nature except around the time of the 1912 presidential election and Wilson's early presidency in which the tone of the letters are highly personal. The addresses are often "My dear Friend", "My dear, dear Friend", or "My dearest Friend" with varying signatures such as "Faithfully and sincerely your friend", "Your devoted friend", or "Your affectionate friend”.

The first 22 letters, dated February 1896 to May 1912, are handwritten. There is a series of 14 typed but autographed letters from 1912 to 1918, all but one written from the White House. The last two, one from October 16, 1921 and one from July, 1923, were written from his "S" Street home. A note from Mrs. Reid identifies the approximate date of the 1923 letter and confirms that it was the last note written to her from Wilson.

Although this correspondence has appeared in published form, researchers may be interested in seeing the facsimile documents and following the continuity of a long-time friendship. 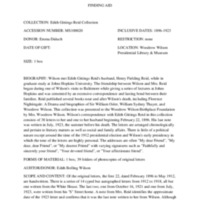