The Poe collection focuses on the work of Elisabeth Ellicott Poe and Vylla Poe Wilson in the Woman’s Section of the Navy League and the National Service School (NSS), particularly schools no. 1 in Washington, D.C. and Chevy Chase, MD. and no. 3 in Lake Geneva, WI. The manuscript collection includes mainly NSS documents such as registration forms and recruitment brochures, as well as articles and press releases, financial records, and correspondence related to the NSS, the Navy League, and the death of Cassie Mason Myers Julian-James. Incoming correspondence also includes a photocopy of a letter from Herbert Hoover and a typewritten copy of a letter from Theodore Roosevelt. The scrapbook collection houses the contents of two scrapbooks related to the work of the Poe sisters with the Woman’s Section of the Navy League and the National Service School. Scrapbook pages are housed in two boxes, one box for each scrapbook. Content of these pages include newspaper clippings, brochures, reports, instructions for soldier care materials, and some correspondence. Scrapbook 1 focuses specifically on the National Service Schools across the country with news materials on the encampments during the summer of 1916 and documents related to everyday operations of the camp. Some materials on the Woman’s Section of the Navy League are included. Scrapbook 2, which contains items from 1916-1922, is wider in scope and focuses on the Woman’s Section of the Navy League, War Brothers Unit, War Mothers Unit, the National Service School, and other civilian soldiers’ aid organizations. The photo collection is housed in one box, arranged by subject. Most of the photos are copies of late 19th century celebrities, many of whom were American dollar princesses who married British aristocrats. It is unclear what significance these photos held for the Poe sisters, but nearly all the people in these portraits demonstrate a clear connection between the U.S. and Europe. There are also photos of the National Service School in Chevy Chase, M.D., and encampments at Lake Geneva, W.I., and San Fransisco, C.A. Also of interest are photos of Woodrow Wilson’s 1915 inauguration and photos of the American Historical Costume Collection (later the Smithsonian costume collection). The picture postcards are housed in a separate box and almost exclusively depict the attendees, staff, and activities of the National Service School. A few postcards were taken during Woodrow Wilson’s attendance of the first encampment’s opening ceremonies. Some of the postcards are duplicates of photos that have been printed on postcard paper. They are arranged according to the photographers’ numbering, with two folders of unnumbered postcards in the back of the box. 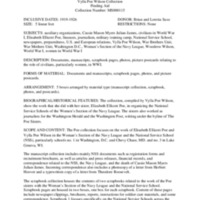